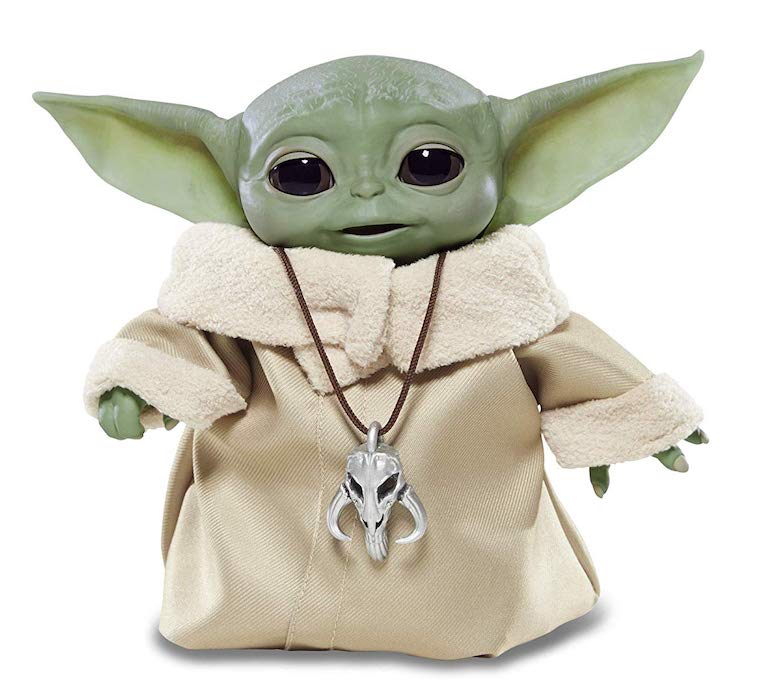 Star Wars The Child Animatronic Edition “AKA Baby Yoda” with Over 25 Sound and Motion Combinations, The Mandalorian Toy for Kids Ages 4 and Up

Price not available
Buy on Amazon

If you’ve ever said to yourself, “You know, I’d like to own an alien one day,” you are about to hit the jackpot: baby yoda.

We proudly introduce you to an alien. We’re not quite sure who he is, or much about his background, so we’re going to speculate here:

This little green alien, while small in stature seems awfully big in personality.

He makes sounds, lifelike movements and is a generally affable young fellow.

We’re going to assume that on his home planet, he was very likely a door-to-door salesman.

He wears a tiny brown robe, which shows us he was likely born on a planet very rich in burlap.

This also suggests the planet he came from had tons of potatoes – that’s the only thing people store in burlap bags, right? So, yeah, aliens probably too.

Since this alien made his presence known on planet Earth, he has only used an ancient alien sound unknown to humans, so there is absolutely no viable way to know it’s real name.

Gary the Alien is also now a toy. One that has an alien head that moves up and down, alien ears that move back and forth, alien eyes that open and close, cute alien charm, and has the power of The Force.

You can purchase this toy for yourself or as a gift for someone you know that is into cute green baby aliens. Amazing!

One of our website interns just came in and informed us all of our speculating may have been pointless.

Turns out this little green dude is Baby Yoda.

And apparently everyone in the world knows who he is.

Something about a little movie called “Star Wars.”

Yeah, well, you know what – we like the name “Gary the Alien” better.

Though we’ve also learned this is an officially licensed toy that looks, sounds and acts exactly like Baby Yoda (also known as “The Child”) from Star Wars The Mandalorian, we think it would be way cooler to go with our “Gary the Alien” backstory.

If you want to wow your family, friends and children with an exact replica toy of Gary the Alien, the Star Wars toy that can raise its arm, close its eyes, and even sigh as if it were using the Force, well, now is your one and only chance! (seriously, this thing sells out on Amazon super fast.)

Imagine the fun you could have explaining his true backstory!

“Check it out, bro! Gary probably eats a ton of potatoes!”

“Hey everyone, gather around while we play with Gary the Alien – he’s always trying to get us to buy products he believes will be useful to us by knocking on our door!”

“We love Gary the Alien, because oftentimes he will pretend to nap! It’s so cute!”

Unlimited fun awaits all who would like to own their very own green alien pet that makes sounds and looks cute and stuff.

Purchase him before he goes back to Burlaptopia…or wherever the hell planet he’s originally from. Tatooine? Mars? Ugh, we give up. We’ll just get one of these ourselves and ask it.

Star Wars The Child Animatronic Edition “AKA Baby Yoda” with Over 25 Sound and Motion Combinations, The Mandalorian Toy for Kids Ages 4 and Up
Buy on Amazon

Last update on 2020-04-02 / This post may contain affiliate links which may give us a commission at no additional cost to you. As an Amazon Associate we earn from qualifying purchases.