$8.62
Buy on Amazon
Define Awesome is a participant in the Amazon Services LLC Associates Program, an affiliate advertising program designed to provide a means for sites to earn advertising fees by advertising and linking to amazon.com.
Share the The Passive-Aggressive Notepad with your friends:

What You Need To Know About The Passive-Aggressive Notepad:

While we’re on the subject of you:

You’ve been a little passive aggressive lately, which is awesome, like me!

Frankly, who doesn’t love passive-aggressive people? Life would be boring without you I guess.

Don’t come right out and say what you’re feeling, EVER.

Just dance around the topic like you’re some bootleg hip-hop dance from the mid-’80s.

Yes, we all love hip-hop, but do you know what we love even more?

Dodging reality and being super stuck-up by sprinkling passive-aggressive dust all over the place while looking at our phones and nodding our heads in agreement.

Here are just a few ways we practiced the subtle, scientific art of being a real passive aggressive hero recently:

Some guy in a Prius took up two parking spots at our office building. Are you kidding me? Freaking jerk. UGH.

I was talking out loud to myself in the car, getting more annoyed by the second.

Man, I showed him.

Note: I definitely did not sign my name to that. I left your moms name.

I went to this chicks housewarming party.

It was the pits. The girl’s entire place was covered in dog hair. Gross-out city. I secretly started the conversation by saying, “So what have you been up to lately besides not cleaning?” Then I brushed it off like it were a joke.

Yeah, you could say I’m a passive-aggressive ninja.

We had a planned work meeting on Tuesday at 9 am. Carl walked in five minutes late.

When he walked in, guess what?

I pulled one of the greatest passive-aggressive moves of all time.

I said this: “Hey, maybe somebody should get Carl a watch for Christmas.” OH, MAN!

Can’t forget that time when I asked someone how they were doing, and they said:

With the emphasis on well, because I’m clearly the smarter person here who actually knows how to speak English and use proper grammar.

Oh and just yesterday, someone called, complaining that the company didn’t do something correctly.

Of course, I kicked in my super-polite, assuring, kind and caring phone operator voice.

I mean, you could hear the smile on my face from the other side of the phone.

But, little did the other side of the phone know… It was my evil smile.

And I was really sitting there writing passive-aggressive notes, folding them into paper airplanes, and throwing them over at other people in the office.

See what people are saying about this notepad

I know, I know, you wish you had stories like my very cleverly intelligent and safe ways to be passive-aggressive.

Remember, all you really have to do is think, “How can I get my point across, but also be vague, and kind of an a-hole?”

When you figure it out, being passive-aggressive is one of the loveliest, most pacifying, annoying ways to be.

But, it just feels sooo good.

It’s time you now spread the love. Open up your passive-aggressive wings with this high-quality Passive-Aggressive Notepad. The world is now your oyster.

From telling someone they smell like hot garbage (indirectly) to really sticking up for yourself and threatening to call the cops (as a figure of speech, of course), this is the ideal way to get things done. Besides, you know, actually getting something done.

The Passive-Aggressive Notepad is perfect for :

Wow. It feels so good to legitimately be better than every other person on this planet.

So smart, so insightful, so progressive, open-minded and thankful. So…passive aggressive. 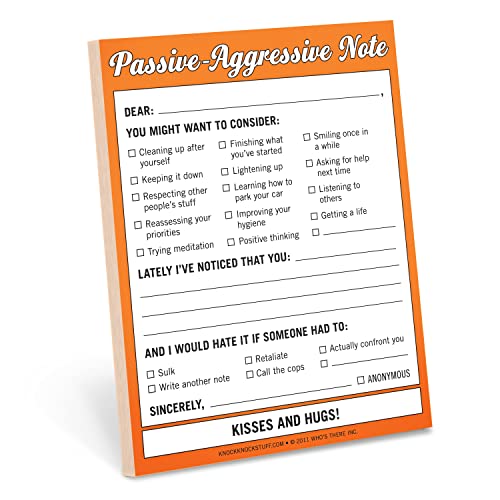 Last update on 2023-01-25 / This post may contain affiliate links which may give us a commission at no additional cost to you. As an Amazon Associate we earn from qualifying purchases.

The Book of Cat Poetry