$12.99
Buy on Amazon
Define Awesome is a participant in the Amazon Services LLC Associates Program, an affiliate advertising program designed to provide a means for sites to earn advertising fees by advertising and linking to amazon.com.
Share the Lend-a-Pen: Funny Pens Nobody Will Steal with your friends:

What You Need To Know About Lend-a-Pen: Funny Pens Nobody Will Steal:

Let’s be honest with each other, thieves are everywhere. Quite literally, everywhere.

Is it a coincidence that both the news media and superhero comic books are filled to the brim with villains?

It’s not. You turn on the boob tube any time of the day and the screen is flooded with images of people theiving left and right. Sometimes right and left.

Some of the thieves actually steal up and down.

Or the other way around.

Forget about comic books. Do you know about The Penguin? Guy is stealing stuff  24/7. He’s stealing stuff like he’s not just a penguin, but some sort of weird kleptomaniac bird.

And how about The Joker? He thinks it’s funny to steal. Is it funny? We don’t like to think so.

Unless it’s someone doing the old “I’ve got your nose” trick, which I think we can all agree is hilarious.

Back to the point: stealing – not great.

Thankfully an invention, in the early 1990’s was made. Mildred Pant invented an ink holder (also known as a pen) that would never be stolen – ever.

You know the type: supervillains, random featured on the news thieves. They’re all about taking stuff. Imagine what it’s like in your office.

People and co-workers have a devil-may-care attitude about taking your pens.

Even worse – people who take your pen without even uttering but a word.

Thankfully, Miss Pant (Ms. Pant if you’re nasty) invented pens that will never, ever be taken from your possession.

She cleverly write things on them such as:

She has created a pen that no one would ever want to be caught with.

The Benefits of Owning These Funny Pens:

3. The funny pens work excellent as a gift

4. They are just hilarious and you need to get them.

So – are you going to be the person who is at work and everyone is treating your pens like it’s some sort of “free gift with every visit” type of situation?

Dude. Come On. You’re Better Than That.

Let everyone who even dares pick up one of your writing instruments know that YOU MEAN BUSINESS and also subtly that YOU MAY HAVE AN INFECTIOUS DISEASE.

Has any human being other than Mildred Pant ever created such humor in the world? We don’t think so. Interestingly enough, she also invented the single-legged pant – her namesake, but that never took off.

Her pens however, live in all of their glory, and you can be part of the magic.

Own a set of the highest quality, premium, elite pens that will set you apart from every other pencil wielding zero on the planet. 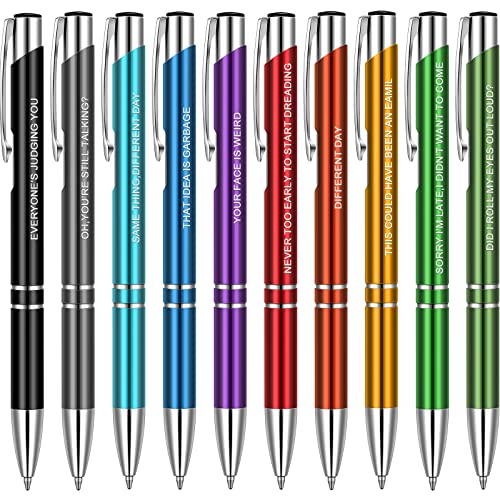