Our Thoughts on The Magic Crystal Ball for Pets:

See what your pet is thinking about at any time with this innovative breakthrough of a Magic Crystal Ball.

Simply put your pet’s paw on the crystal ball and the powers within will illuminate the orb to show you a lifelike, 3D picture of what your animal is thinking.

We’ll be honest…it’s not always pretty.

During pre-trial testing of this product, we were able to see that many pets in certain categories think about similar things. Here are those results:

1. The Magic Crystal Ball With Cats:

We found it most difficult to get a cat to actually give us it’s paw to put it on the crystal ball. Every cat seemed to think they were better than us. Each cat kind of had an air of, “Get the hell away from me” about them. Fortunately, when we were finally able to get the cat to cooperate, we were able to view their innermost thoughts.

E) “Snuggle time is over, get away from me.”

1. The Magic Crystal Ball With Dogs:

Dogs were all about using the crystal ball. They loved giving us their paws, slobbering on the orb and generally being clumsy and knocking it over. Fortunately, we were able to get some consistent readings across the board as to what they were thinking about. We were most surprised with exhibit C which showed an unexpected mental capacity initially thought impossible.

A) “FOOD. TREATS. TABLE SCRAPS. ANYTHING.”

C) "Zachary Taylor was the 12th president of the United States, serving from March 1849 until his death in July 1850. Taylor previously was a career officer in the United States Army, rose to the rank of major general and became a national hero as a result of his victories in the Mexican–American War. As a result, he won election to the White House despite his vague political beliefs. His top priority as president was preserving the Union, but he died sixteen months into his term, before making much progress, which inflamed tensions in Congress."

1. The Magic Crystal Ball With Fish:

Fish, as many owners already know, are considered the most intelligent of all pets. Though it was not simple to get their little fins to touch the orb for the time required to read their thoughts, we were successful. Here are the most common thoughts from fish:

A) “These weirdos are going to try and catch us with a fishing pole someday aren’t they...i just know it.”

B) “You know, if i wasn’t surrounded by water my entire life i’d give smoking cigars a try.”

D)“Am i being filmed for the most boring reality show of all time, or what?”

E) “Well...better get back to sleep with my eyes open again, on account of not having eyelids.”

There you have it, the most common thoughts of the most popular pets, courtsey of the crystal ball.

Find out what your pet is thinking with the Pet Crystal Ball!

It’s fake. Just an empty gift box. Still awesome, though. Fill the box with your gift and endless giggles from the recipient. But, honestly, we think dogs are up to something.

Our Favorite Amazon Review of the Magic Crystal Ball for Pets:

I LOVE This Magical Crystal Ball!

My cats thoughts and ideas of me are SO WEIRD!!! While I kinda wish I didn't know what my cat was thinking now that I know, I did want to know. And this did it's job. JK! It's a box! 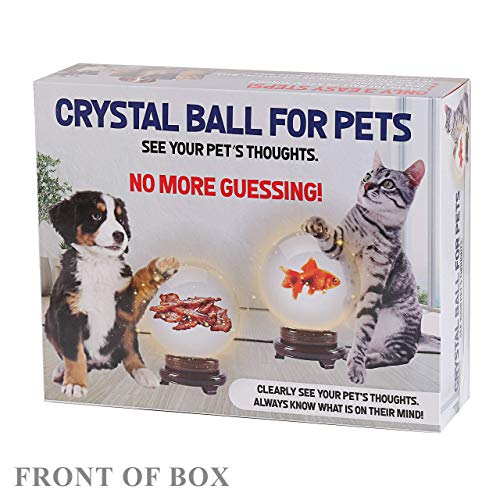 Last update on 2020-05-31 / This post may contain affiliate links which may give us a commission at no additional cost to you. As an Amazon Associate we earn from qualifying purchases.

The Non-Lethal Salt Self Defense Gun