Justice is served every time you play this robot vs. robot game - because there’s a winner. One winner. Not some lame modern-day version of a winner, like, “Oh, you tried your best, here’s a high five and participation trophy!”

The future is upon us.

At some point there was some sort of weird Honda military robot thing that could do squat thrusts.

And now trucks that look like the F-117 Nighthawk Stealth Fighter.

Not to be too vague, but let’s just say we’re pretty sure the moon has a listening device in it.

We’re not 100% sure – BUT – we did once utter in the silence of night in the middle of a forest that we liked brie cheese – and the next thing you know we started getting served ads for brie cheese on Instagram.

Unfortunately, it’s not that weird. It’s life in the big city, my dude.

It’s life in the 21st century.

It’s so pervasive, that there’s probably a shelf in our refrigerator right now that’s weighing our milk and thinking “This homebody needs more 2% milk all up in this frigid air.”

That’s why technology fails us. It just can’t understand our needs.

Are you kidding me?

Technology just doesn’t get it. It thinks it’s so much smarter than us.

Technology is probably all full of itself like, “I can do whatever I want! I can load up Microsoft Encarta! I can Ask Jeeves! I can make MySpace!”

No way, dude. The future can kiss our external hard drive. AM I RIGHT?

We’re going back to the good old days. The days when robots were actually robots. And by “actually robots,” of course we mean “plastic.”

These robots won’t tell you what music to listen to, or what software to load. They’ll simply sit there until you start crackin’ plastic robot skulls on your way to victory.

Justice is served every time you play this robot vs. robot game – because there’s a winner. One winner.

Not some lame modern-day version of a winner, like, “Oh, you tried your best, here’s a high five and participation trophy!”

The robots go at it.

Want to figure out who takes out the trash?

Want to decide who gets to shower first?

There is literally nothing that can’t be solved with classic robot fighting.

But what can be fixed with modern-day technology?

Simply the fact it allows you to order the classics.

No more “HEY ALEXA, HOW CAN I BE AWESOME?”

The answer is here: good old fashioned robots. And they don’t talk back to you. They just get it done. 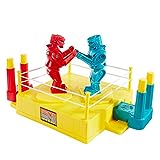 Last update on 2020-04-02 / This post may contain affiliate links which may give us a commission at no additional cost to you. As an Amazon Associate we earn from qualifying purchases.