$6.49
Buy on Amazon
Define Awesome is a participant in the Amazon Services LLC Associates Program, an affiliate advertising program designed to provide a means for sites to earn advertising fees by advertising and linking to amazon.com.
Share the Shakespearean Insult Bandaids with your friends:

What You Need To Know About Shakespearean Insult Bandaids:

Thy cut is in itself a complete disaster of epic proportions!

You know your slice of skin which has caused blood to make itself viewable to the world is embarrassing, yes?

As a matter of fact, we are all embarrassed by the cut.

It is small. It is slight. It is so minute, that it shows your body can barely hang on to the ability to heal a cut by itself.

It clearly needs a man to fix it.

A man who, for some reason wears clothes that make him look part Halloween costume, part Bible expert.

Um, perhaps you’ve heard of him? Wikipedia calls William Shakespeare “That dude who rules all and still gets the ladies even after death.”

OK, maybe that’s not a direct quote, but honestly, it’s pretty close to being the truth.

You probably love Shakespeare. Awesome, because here’s the deal:

You’ve got a cut, and you love the writer responsible for Hamlet, Macbeth, and Romeo & Juliet.

Well, we’ve got the anecdote, hombre.

How about bandages with Shakespeare’s must righteous insults all up on them?

This way, you can have your cut, and insult it too.

Sure, you’re probably sitting around, feeling sorry for yourself, like, “Dang, what if I get a paper cut and I have to put some boring bandage that is made of flexfit or some other term I’ve never heard of?”

How about sticking a bandage filled to the brim with insults from the roast master himself, William Friggin’ Shakespeare on it?

This guy has the gift of gab, and you can benefit.

Here are some insults not included that you might consider hurling at people while you’re wearing your bandage:

Thine a monkey of the least declaratory wit. You shall remain lowest on the totem pole of life.

Mine insufficient competitor, thy will never be able to compete in a colossal tussle of any magnitude.

While a major component of the lakes that rivers choose to ignore, your lazy eye is a reason that your vision is questionable at best.

OK, this one makes no sense – but still, it sounds like something that is fairly hurtful.

Stop wearing boring bandages. Start wearing bandages with quotes from the dude who knows language better than pretty much anyone, ever.

Billy Shakespeare. All up on your cuts.

Get Some Bandaids
Sale 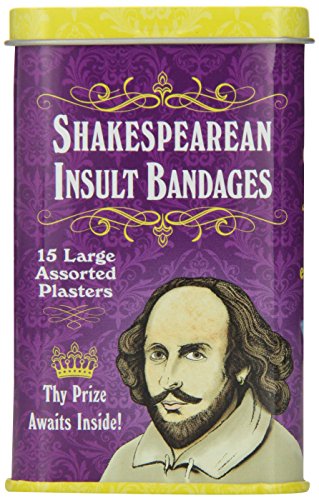 Last update on 2023-01-22 / This post may contain affiliate links which may give us a commission at no additional cost to you. As an Amazon Associate we earn from qualifying purchases.