Our Thoughts on The Handy Hand:

What’s a handy hand, you ask?

Details of that startling day are, as you know, chronicled in the hit film “Toot’s Banana Quandary” which is the #1 grossing film of all time.

In the film, we meet Toot’s dog Gershwin Barkvark, a tiny pomeranian with a big personality.

Remember the scene where Barkvark ends up putting on a clown wig, hover shoes and rides a unicycle on a tightrope?

Though one of the more classic scenes in the film, we never actually see the dog get it’s treat (though we assume he does as referenced by the dog singing “Too Many Treats-A-Bellyache for Me” during the closing credits).

What the film doesn’t cover, is how Mr. Toot was able to feed the dog, after his accident.

As we all know, Marlon Toot loved his dog. He loved giving his dog treats. Why would he ever risk losing the only good hand he had remaining?

For the first time ever, we’re about to reveal something about Marlon Toot that no one in the world knew.

Just when you thought we all knew everything there was to know about him, we have one more tidbit…

No, it’s not the fact that he only collected Billy Ripken baseball cards. We all knew that.

No, it’s not the old story about how he once ate only steak gristle for six years. Duh.

No, it’s not a rehash of the details surrounding his gold medal winning performance whilst breaking the world record for using the most starch of all time on a pair of pleated khakis.

The Handy Hand, a Prop Hand on a Stick.

This handy hand revelation was exposed by carefully dissecting old film reels that show Toot in between scenes on the set of the movie. We have actual proof, live and in living color.

The prop handy hand on a stick was Toot’s ingenious invention to ensure he could incentivize Barkvark without risking the loss of his right hand!

Now you can be just like Marlon Toots, with this gorgeous replica of the actual prop handy hand on a stick used to feed Barkvark!

Being part of what every film critic has called “The greatest cinematic achievement in the history of civilization” isn’t possible.

We, unfortunately, cannot help you star in “Toot’s Banana Quandary.” We can however, give you a piece of Marlon Toot’s unparalleled genius with this prop handy hand on a stick.

Feed your dog from a safe distance, and as the famous old saying goes, Never Let What Happened To Toots, Happen To You™

Disclaimer: It’s a fake box. You can put whatever you want in it.

Our favorite review of the handy hand:

They should really make this Hand!!!

Can’t stop laughing at the features of the “Handy Hand”...I gifted it to a friend who is a germ-a-phobe..and her accident prone spouse who is always injuring his hands! What’s even more halarious, is when she opened the box to see it WASNT a “Handy Hand’..she was disappointed it was a sweater and wanted to know “who got the Handy Hand”! She thought I was reusing the box and was clearly disappointed! LOL, ROFL and LMAO!!!😂 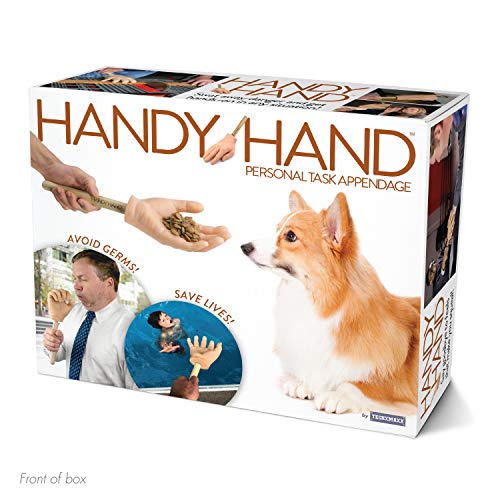 Last update on 2020-04-16 / This post may contain affiliate links which may give us a commission at no additional cost to you. As an Amazon Associate we earn from qualifying purchases.

The Non-Lethal Salt Self Defense Gun

The Unicorns Are Jerks Coloring Book

The Gift of Nothing