If you've ever received a gift that you were less-than-thrilled about and wanted to re-gift, you're not alone.

And it’s not just the giving part, it’s receiving too. In fact, one survey suggests that an overwhelming majority of people – 83 percent – are completely comfortable receiving a re-gifted item.

Re-gifting is the perfect choice if you’ve been invited to a white elephant party. In case you haven’t heard of this fun party game, it involves a group of friends, family members, or office mates, who exchange silly or bad gifts amongst each other.

White elephant gifts are a great way to unload that oddball gift you got from Aunt Bertha for your birthday last year or just an excuse to buy a silly gag gift to make people laugh. Continue reading for a list of the 10 best gifts of 2018 to help inspire you!

The game is a fun and inexpensive way to make a party more interactive and also helps break the ice. The white elephant gift rules are fairly simple:

Bring one wrapped item, whether it’s new or regifted, to donate to the gift pool.

2. Place in a Central Location

Place all gifts in a pile in the center of the room.

3. Choose a Name or a Number

Have each person draw a name or a number to decide what order to go in.

Players gather in a circle around the gift pile.

Player number one chooses a gift and opens it for all to see.

Any player after player number one has two options: open an unopened gift or steal an opened gift from a player who’s already had a turn. Continue this process until every gift has been opened.

There are always a handful of gifts that everyone has their eye on. Because of this, a player can only steal the coveted gift from another player once.

Once the game has ended, it’s perfectly fine to continue to swap gifts if you both agree to it.

How did this fun party game get its name, anyway? Its roots lie in the legendary tale of a Siamese king. Because white elephants were very rare, not to mention costly to care for, the king would give one as a “gift” to anyone who made him unhappy. This burden was a stressful responsibility for anyone in the kingdom and brought a lot of unwarranted attention to the recipient.

Despite the fact that this tale has been retold time and time again, there is conflicting historical evidence that says otherwise. Because white elephants were actually considered sacred, some history buffs insist this legendary tale never happened because of the honor bestowed upon ownership of such a rare creature.

Regardless of its roots, it’s safe to say that playing this game has always been a big hit at parties. For some great white elephant gift ideas, check out the 10 below!

Depending on your budget, there are a variety of gifts to choose from below. Pick something simple or over-the-top to give your gift recipient something to talk about for years to come!

Whether you’re obsessed with popping bubble wrap and want to give the gift of it to a co-worker or you think it’s just plain weird, this bubble wrap suit is the ultimate white elephant gift. It comes in one-size-fits-all so there’s no need to worry if it will fit. And its entertainment value is totally worth the under $30 price tag.

Big beer bellies and hairy chests are all the rage now – on swimsuits anyway. This one-piece dad-bod swimsuit is the ultimate gag gift that will have everyone doing a double-take on the beach and at the pool. You’ll be a big hit at the party with this silly gift that players are sure to want to steal as their favorite.

Talk about a snotty situation! Separate your egg whites from the yolk with ease, straight from the nose of this silly product. The Mr. Sneezy Egg Separator is both hilarious and disgusting and is sure to garner all the attention at the party. 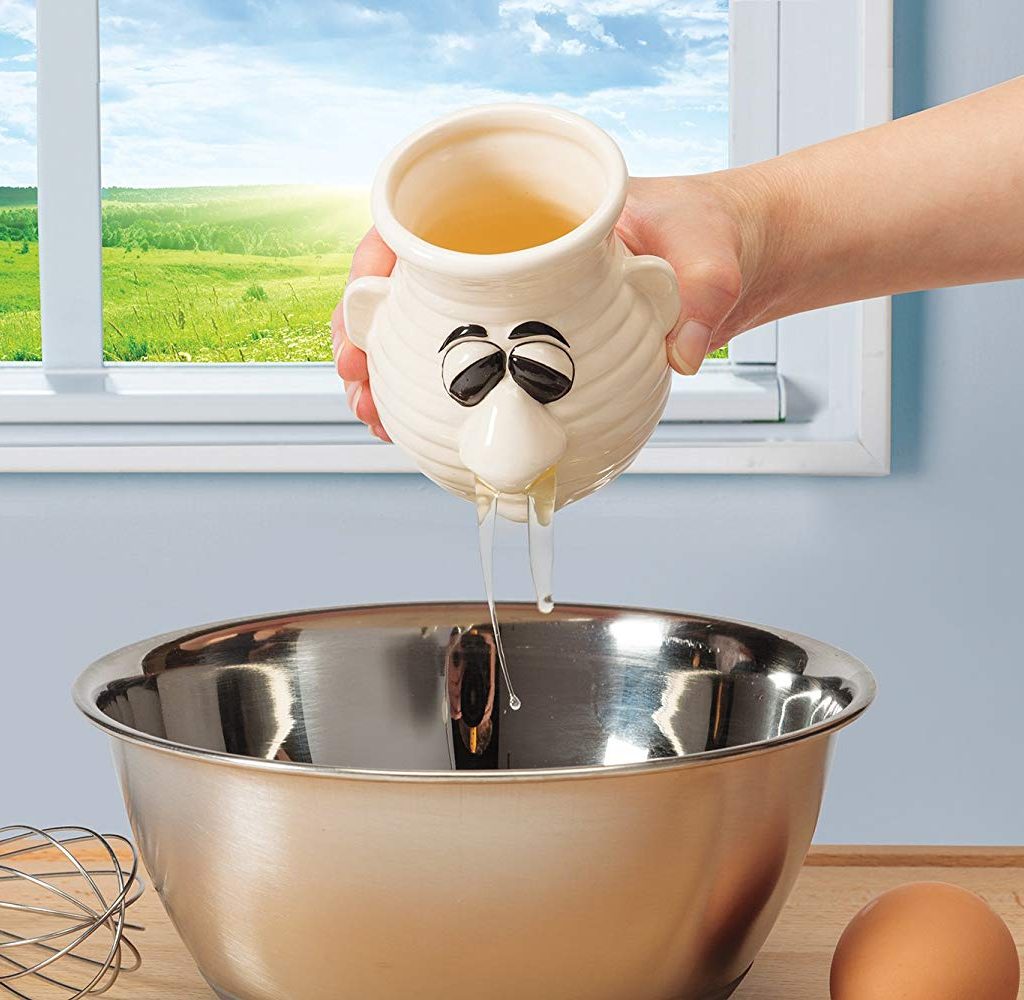 Who hasn’t need an official BS button in their life? Hit the button for a sassy phrase to alert people they’re in the BS zone! This is the perfect gag gift that everyone has room on their desk for.

Coffee is the rocket fuel we all need in our lives. But for some folks, it’s more like bathroom fuel. For those who need an extra laugh in their morning ritual, this hilarious toilet coffee mug is just the thing. 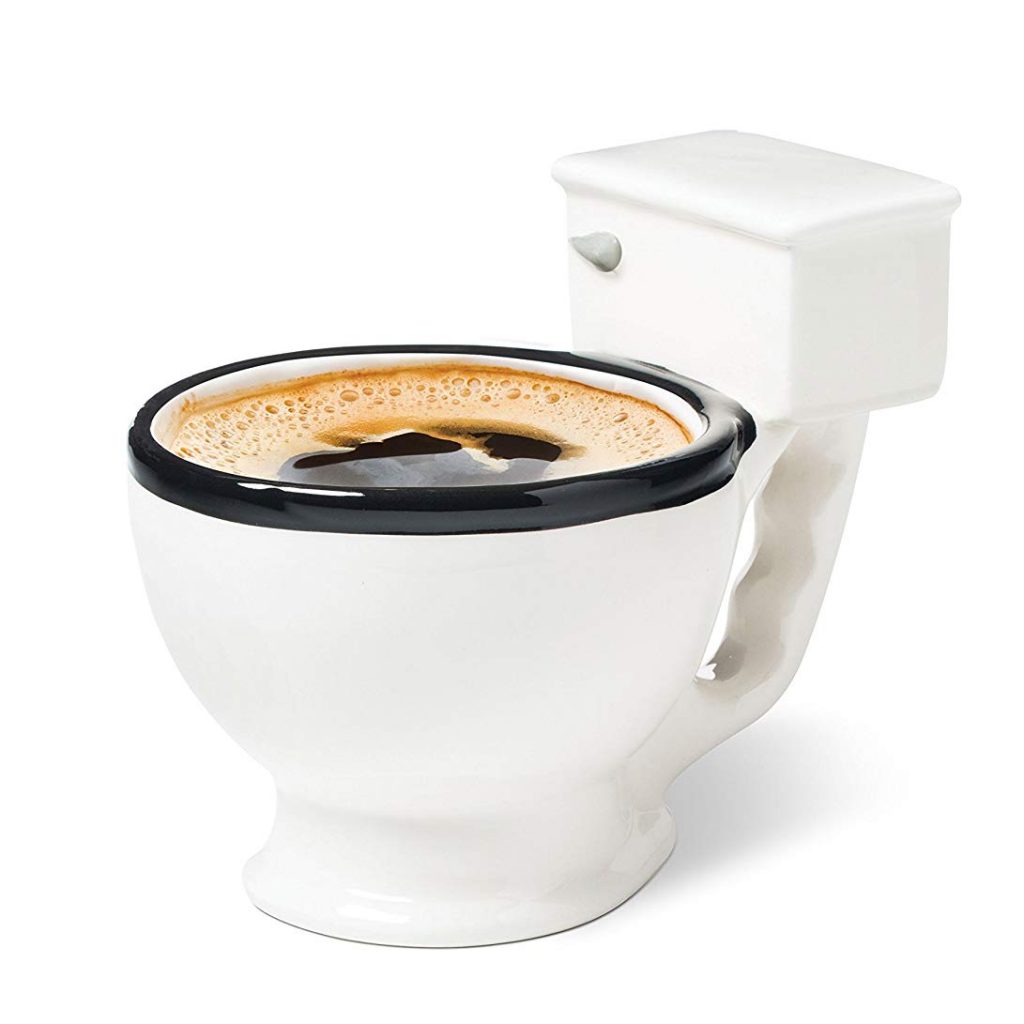 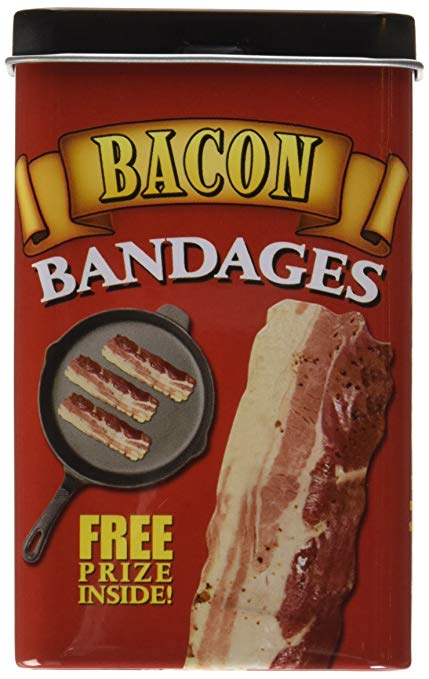 Remember when old-fashioned cartoons put a cold steak on a black eye to make it feel better? Well, these bacon bandages are the next best thing! Not only are they a whole lot more sanitary for your boo-boo, but they’re downright silly too!

Let’s give this gag gift a round of applause. Finger hands are sure to be an instant hit for gift recipients of all ages. Entertain the kids, or yourself, for hours on end with this inexpensive toy!

Who on the planet is NOT obsessed with cute little Corgi butts? Carry this darling doggo booty with you wherever you go while keeping your change stylishly tucked away. Bring this adorable Corgi butt coin purse with you to the next white elephant party and watch guests duke it out for ownership.

Whether they’re three-months-old or one year, start them off right with their very first chore – mopping! This wacky gift is actually a practical one too. Make sure you share the gift of clean floors with the Baby Mop at your next white elephant party!

There is always a bad occasion to use the poop emoji: a break-up, getting fired, or a just plain crappy week! And nothing says life stinks more than a poop emoji cake! This is the perfect white elephant gift and will make you the star of the party for sure!

Ready to Rock Your Next White Elephant Party?

We hope you enjoyed our list of the 10 best white elephant gifts in 2018. No matter what type of party you’re a guest at, we think you’ll enjoy our endless choices of gifts to share with all of your favorite friends, family members, and co-workers.

For more great gift ideas, check out some of our most popular gifts and let us know what some of your favorites are!

The Coolest Sunglasses Ever

Let’s face it, you look awesome with cool sunglasses on. But sometimes, it’s not worth all the hassle to drive all the way to the ancient ruins known as “The Mall” to find a pair, priced $100 over the price of the item from the manufacturer themselves on their new website. So, how do you […]

Have you ever woken out of bed thinking of breakfast? It’s a boring thought. That’s why The Mr. Sneezy egg separator is what your awkward mornings have been looking for; a conversation piece! Worried you might be late for work? Well, this egg separator is guaranteed to turn any pancake frown upside down. Mr. Sneezy’s […]

Every person who prides themselves on personal excellence swears by The Fart Neutralizer. Whether you’re a queen of a prominent country, the king of a small island, or a person in-between homes in a tiny town in North Dakota, you are likely aware of the urgency to make your farts less noticeable. Frankly, the only […]

Let’s pop right to the chase: this is a bubble suit that will change your life. You sit there, bored. Looking around. Dreaming of a better life. You get five minutes to yourself and you decide to lay down. Take a nap. Have a rest. You think about “what could have been.” You think about […]

“Am I completely zoned out of my mind on catnip, or am I right in thinking this house is going to have cats living in it?” The most common question asked by your visitors can be answered with a simple doormat, thanks to the incredibly luxurious underfoot mat which reads;  “There’s, like, a bunch of […] 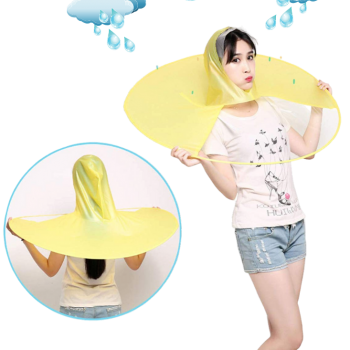 It’s Raining. But, this time something is different. It feels right. It feels different. It’s like, magic or something. It’s the Hands-Free Umbrella! For the first time ever, you can have TWO FREE HANDS while it’s raining! There are more benefits to it than just having two hands in the rain… And we’ll get to […]

311
Price not available
Buy on Amazon

When wearing the Rainbow Unicorn Head, you’ll notice a few pretty significant changes in your surroundings, and possibly leading to life-changing experiences which come with side effects which include, but are not limited to…

Let’s be real; pet fish are the easiest pet to take care of. But sometimes, even throwing some food in their tank now and then can become a real hassle when you’re busy trying to take over the world. Well, the robotic pet fish is the answer to any and all of your problems. Here’s […]

What if you had a BS detector… What would you do with it? Where would you take it? The official BS Auto-Detection Button with A.I. capabilities listens to your voice, analyzes changes in tone, measures the level of humidity in the air to sense when you’re sweating (aka lying) and even has retina eye scanner […]

It was said that the only thing babies could do is eat, cry, sleep, & poop. But Did You Also Know That Babies can Mop Floors?! It may be cute, but let’s face it, babies haven’t really been known to do chores and clean messes…. until now. We understand the concept of you don’t work; […]