What You Need To Know About The Retractable Umbrella Backpack:

Ever heard of Baxter Umbrella?

Not to spoil the story, but let’s get right to it: he’s the inventor of the umbrella backpack.

But do you know why he invented the umbrella? Let’s take a journey back to the monumental year of 1837.

Baxter had a passion for taking photographs. Back then the hobby was called, “ye olde life capture.”

As a seasoned ye olde life capturer, Baxter pushed himself to the limit.

What Baxter had never done before, was taking photos in the wild.

Nature was calling, and if phones existed in 1837, you can bet he would have picked up the phone.

Also, speaking of nature calling, Baxter was somebody who needed to keep all of his camera equipment in one place, because he had to go to the bathroom pretty often. And he didn’t like being disorganized.

So he sat down. While sitting, he simultaneously pondered and considered how to organize his beloved photography equipment.

Back in the 1800s, camera equipment weighed a few hundred pounds and consisted of like a million (or even a bajillion) pieces.

That was easy. Mr. Umbrella had crafted a gorgeous, premium backpack that he could easily affix to his back. But, there was something missing…

Dazed and confused, he sat again. He thought. He meditated. His mind explored the vastness of the universe – and an idea came to him.

It was then he realized his life’s purpose. He got right to work and built the first-ever waterproof backpack umbrella combo device. Behold:

He was able to stay dry, without having to even hold the canopy, because it was cleverly built into the premium backpack.

He was able to take all of the photos he ever dreamed of. His favorite being one of a leaf…or something like that. Maybe a stick. Who knows.

Point is: the umbrella backpack lives on.

Sure, it’s been modified for well over a hundred years. And on top of that, he forgot to patent the idea. But the name of Baxter Umbrella lives on in every outdoor photographer to this very day.

If you’re a photographer, and you don’t like getting yourself or your camera equipment wet – you already know what we’re about to say next:

YOU HAVE TO OWN THE LEGENDARY UMBRELLA BACKPACK. LIKE, YESTERDAY.

With this ingenious, historical invention, you can become the most famous life capturer of all time.

Other than this camera backpack being awesome and rugged, it’s also:

The next time you go off on an adventure to take photography that will live on, give a nod to the godfather of photos in the rain, would you? 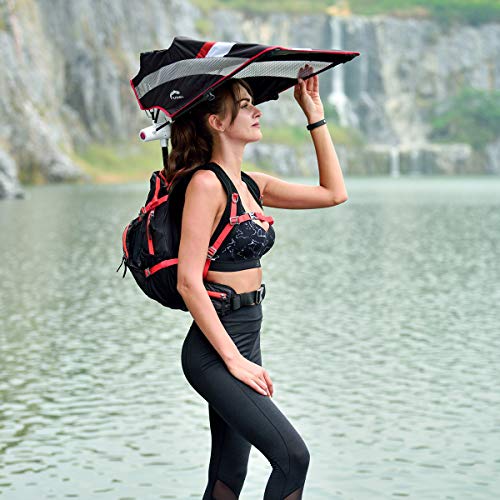 Last update on 2021-09-27 / This post may contain affiliate links which may give us a commission at no additional cost to you. As an Amazon Associate we earn from qualifying purchases.