WHAT DO YOU MEME? 100% Fully Closed Prank Pistachios

Buy on Amazon
Define Awesome is a participant in the Amazon Services LLC Associates Program, an affiliate advertising program designed to provide a means for sites to earn advertising fees by advertising and linking to amazon.com.
Share the Prank Pistachios with your friends:

What You Need To Know About Prank Pistachios:

Uncle Harold – who is he? This gentleman is a tried and true pistachio connoisseur.

And a prank master. The man himself has now released his masterpiece, and you have a very limited time to take advantage of this incredible opportunity.

We proudly present to you:

These gorgeous tins of purported pistachios are going to infuriate even your closest friends and family members.

Is it because these pistachios are so delicious they’ll make whomever eats them turn into a strand of hair on Uncle Harold’s finely groomed beard?

Is it because you’re such a jerk that just being around infuriates everyone?

Nah, that can’t be it either.

Is it because one lick of the pistachio Uncle Harold has provided will give you a protein energy burst that you’ll find helpful in your secret mission to invent a way to temporarily remove your torso from your lower body so you can rocket off into the atmosphere a bit easier (since you’ll be much lighter)?

Do you really want to know the real reason that anyone who comes into contact with these four tin cans that advertise deliciously, high-end pistachios will become so enraged they may burst into an electric light and dissipate into the air?

These nuts? What could possibly piss anyone off about these small, green, highly-edible nuts imported from the far corners of the world?

YOU CAN’T OPEN THE SHELL ON THE PISTACHIOS.

UNCLE HAROLD HAS DONE IT AGAIN!

Have you ever reached for a pistachio, go to break it open and it’s nothing but a tease?

You know, you get a bag, open it up, and select a pistachio. Then all-of-a-sudden, you notice it’s not already half opened.

What do you do? Do you take the chance of breaking your fingernail for the precious, small green nut inside? You may open it. But then again, you may not.

In this case. You definitely aren’t opening it.

The world around you will slowly but surely collapse in on itself when whoever the goof is that tries to open these prank pistachios realizes they’ve been made the fool.

But what does Uncle Harold truly love? PRANKS.

Give the gift of laughter, of love, of…Uncle Harold to anyone you know who understands what it means to live life. To have real emotion. To revel in the fact that the have been given, not just a can of fake pistachios, but a tin can of opportunity.

The opportunity to almost clench your longing desire of the taste of that small, delectable green nut…

The opportunity to pass on the canned gift of laughter they have received once they realized that the pistachios, while visually appealing, are impossible to open.

Your victim, the pistachio seeker will try to open the shell…and it’s not going to happen. HAHAHA!

What they do have now, is the opportunity to use that very tin can as a display item in their home.

Wow, what an incredible decoration.

The opportunity to look Uncle Harold square in the face, and after being made a fool in front of who knows how many friends or family members, or… people in general, say to him:

“Uncle Harold. Good sir. I salute you this day. You are a true bully, and I thank you. Today, you have made me a superior human being for finding subtle humor in the idea of a falsified can of your nuts.”

If we can suggest one rule, should you choose to buy this item.

Do not use responsibly. 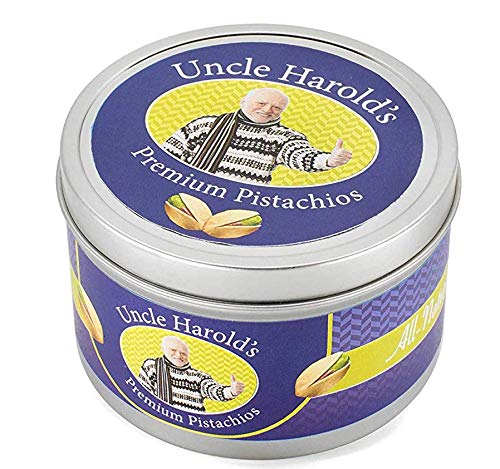 WHAT DO YOU MEME? 100% Fully Closed Prank Pistachios
Buy on Amazon