$26.92
Buy on Amazon
Define Awesome is a participant in the Amazon Services LLC Associates Program, an affiliate advertising program designed to provide a means for sites to earn advertising fees by advertising and linking to amazon.com.
Share the The Magical Talking Parrot with your friends:

What You Need To Know About The Magical Talking Parrot:

Even children are smart enough to know that robots are taking over the world.

Between artificial intelligence, voice-activated everything and the future landscape of employment basically being taken over by lines of code, where can we turn for comfort? Who could possibly help our kids in such uncertain times?

We’ll tell you who: this friggin’ parrot.

It can record any voice, in any language, even singing, and repeat it back as only a parrot can do.

It can be like a little buddy for a child. A best friend to speak to play with, put on shows, pet, all that good stuff.

Oh, no. Wait a second, THIS THING IS A ROBOT TOO?

Let’s just say, just as a goof, this parrot toy was a robot. Let’s just say, for the heck of it, that it was able to communicate by recording a voice and mimic it back to the person playing with it…

WOULD THAT CLASSIFY IT AS A ROBOT?

Turns out the parrot is just a legit toy.

So legit, in fact, that for a brief moment we had spiraled into a theory that it was part of an Illuminati scheme. Our bad.

You should consider buying this parrot (WHICH IS DEFINITELY NOT A ROBOT OR GOVERNMENT OPERATIVE) if you have a child in your life that deserves awesome gifts.

Stuffed animals that don’t do anything are so 1885. What’s next, are you thinking about getting a rock and a stick gift pack too? Screw that.

This talking parrot kicks up your gift-giving game to the next level. It’s everything you’ve ever wanted in a gift: snuggly, talkative, funny, cute. Damn, this thing is a beast. A beast of a gift, that is.

Simply press the button on the parrot, talk, sing, make noises, beatbox, whatever. The parrot will repeat it back to you in a silly parrot voice. Kids from ages 09 to 143 will absolutely love it.

You could even name the parrot if you’d like. We named ours Illuminati Isaac. 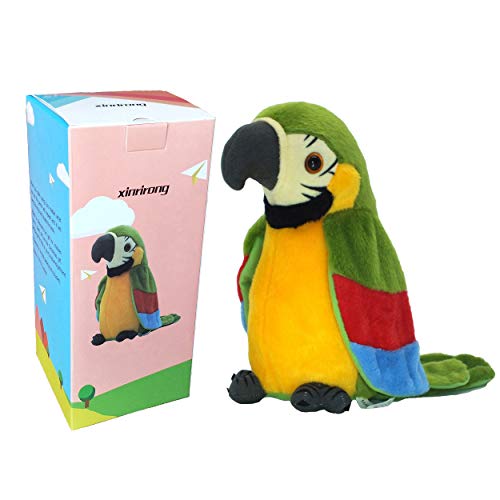 Last update on 2023-01-21 / This post may contain affiliate links which may give us a commission at no additional cost to you. As an Amazon Associate we earn from qualifying purchases.