$9.99
Buy on Amazon
Define Awesome is a participant in the Amazon Services LLC Associates Program, an affiliate advertising program designed to provide a means for sites to earn advertising fees by advertising and linking to amazon.com.
Share the Fake Electrical Wall Outlet Stickers with your friends:

What You Need To Know About Fake Electrical Wall Outlet Stickers:

What would you do with fake wall outlet stickers?

Maybe you’re the life of the party. You’re the person who everybody turns to for a good laugh.

“You always make me laugh!” they remark.

But what happens when you don’t have a crowd to make laugh?

What happens when you run out of the absolute funniest thing to say at the exact right moment?

Fear not my jokester friend, you’re in for a real treat with these fake outlet stickers.

They do the work for you, while you sit back, relax and watch the hilarity ensue.

These fake outlet stickers can be used a thousand different ways, each one funnier than the last.

Here are just a few hilarious suggestions for use:

#1 Best Use of Fake Wall Outlets: The Airport

Put them on a wall while you’re waiting to catch a flight at the airport. Imagine the crowds of people who will jump at the chance to use an open outlet to charge their phone or laptop. But guess what? They go to plug in their charger and then guess what happens?

OH MY GOODNESS! IT’S NOT AN ACTUAL OUTLET.

You’re in the corner, rolling around laughing. Everyone realizes it was YOU who placed the fake wall outlet on the wall. The entire airport breaks out into applause at you, the Airport Jester. Job well done, fine sir. Or Ma’am.

#2 Best Use of Fake Wall Outlets: At a Party

If you’re at a house party, or any party in general really, put these outlets everywhere. That way, each time you silently slink into a room, you can catch a different person each time trying to make use of what you well know is a fraudulent electrical outlet. Once people catch on to the rouse – HIGH FIVES ALL AROUND.

“I COULD HAVE SWORN IT WAS AN ACTUAL OUTLET” the rubes will say – followed by eruptions of laughter and “Bravo’s” at whomever the comedy genius was who placed these ingenious decals upon the walls.

#3 Best Use of Fake Wall Outlets: The Outdoors

Ready for the most brilliant way to use these decals? Buckle up. Put them on a tree.

A TREE. WHY WOULD A TREE HAVE ELECTRICITY? IT SEEMS IMPOSSIBLE!

But when people see it, they might just be fooled. Then they try to plug something in – say a lamp, or a circular saw….and guess what? IT’S NOT AN ACTUAL OUTLET!

They’ll be confused and let-down. Meanwhile, you’ll be peering out from around the corner of the house, with a smirk on your face that reads, “I’ve pulled yet another astonishing prank.”

These are just some of the many crazy ways you can use fake outlet stickers like the brilliant person you are. Who are we to limit your infinite intelligence on what may make these the perfect items for you?

Frankly, we bet you’re thinking of some crazy ways to debut these babies right now, aren’t you?

So if you’re looking to take your prank skills to the next level and once and for all, it’s time you take the throne as the OFFICIAL KING OF PRANK COMEDY.

Without a doubt, these fake wall outlets are for you.

Do you know what’s even better? There are 12 of these bad boys in a pack. Which means you can line these things up on walls at 12 of your friends’ houses, like a boss.

It’s like, some sort-of damn power bank of laughter. Just POW! BOOM! BAM! LAUGH! SNICKER! GIGGLE! All of it happening at once.

You’re not too old for this.

And hold on for the rollercoaster of fun that will ensue once you whip them out.

With these wall outlet stickers, you will always have fun, guaranteed. 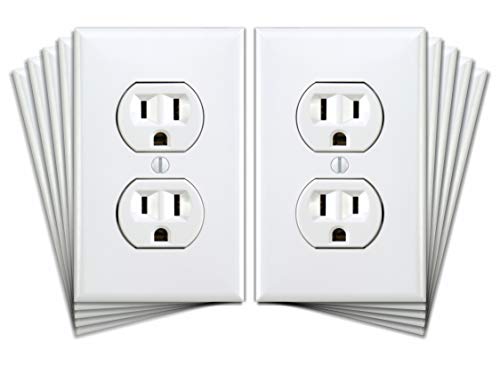 Last update on 2022-07-06 / This post may contain affiliate links which may give us a commission at no additional cost to you. As an Amazon Associate we earn from qualifying purchases.

Lend-a-Pen: Funny Pens Nobody Will Steal

The Grow a Real Boyfriend