$50.00
Buy on Amazon
Define Awesome is a participant in the Amazon Services LLC Associates Program, an affiliate advertising program designed to provide a means for sites to earn advertising fees by advertising and linking to amazon.com.
Share the The Life-Size Kim Jong Un with your friends:

What You Need To Know About The Life-Size Kim Jong Un:

You think you’re so cool.

You’ve got great friends, get invited to fun parties and have an overall fun life.

But guess what? There’s a huge problem in all of this perfection that you have overlooked.

Does the Supreme Leader of North Korea even know who you are, bro?

That’s a problem, my dude. A big problem that needs to be fixed.

Here’s what that means: it means that sure, you may rock hard. You may be cool. You may have friends at work and in your neighborhood – but you haven’t reached Supreme Leader Awareness.

You may be thinking to yourself, “That’s fine, I’ll just write him a letter and invite him to be one of my bros.”

That’s not going to work.

To get inside the head of a Supreme Leader, you’ve got to do much, much more.

That’s exactly why this item, the North Korean Supreme Leader cardboard cut-out of Kim Jong-Un will be very, VERY beneficial for you.

The cardboard cut-out of Kim Jong Un is life-size.

This will allow you to practice how to act when you’re in a room with Mr. Jong-Un himself.

Who the hell knows. Practice them all ahead of time and see what seems right.

Dance-Off. Imagine if Kim does end up coming to visit you.

Then he wants to have a dance-off. AND YOU’RE NOT PREPARED. Then you try to dance and you embarrass yourself because you’re so nervous about being in his presence.

By dancing your best moves in front of this cardboard cutout, it will ensure you don’t drop the ball when it comes time to do the Cha-Cha Slide.

Intimidation. Kim Jong-Un may look like Spongebob Square Pants and a Chia Pet had a baby, but in real life, he’s probably somewhat of an imposing figure. By keeping this cardboard cutout in your area, it will set the tone for your family, friends, associates, and co-workers that you mean business.

Sure, Kim Jong-Un has generally been referred to as a “dictator.”

OK, maybe he’s not the nicest guy in the world, we get it.

But by keeping this cardboard cutout close, it means you’re preparing yourself for all possibilities.

The potential that he’s awesome and just wants to hang out and boom, you’ve got a new best friend.

He comes to visit you with the intent of dropping a nuclear bomb in your living room.

If Kim Jong Un himself sees this cardboard cutout, he would be impressed.

Then, maybe he’d take you back to North Korea.

How flippin’ cool would that be?

Who knows, you could be named Deputy Supreme Leader.

Be prepared for everything with the cardboard cutout, lifesize presentation of Rocketman, the North Korean Supreme Leader, Kim Jong-Un.

If nothing else, you can use it as a makeshift fire hydrant for your dog. 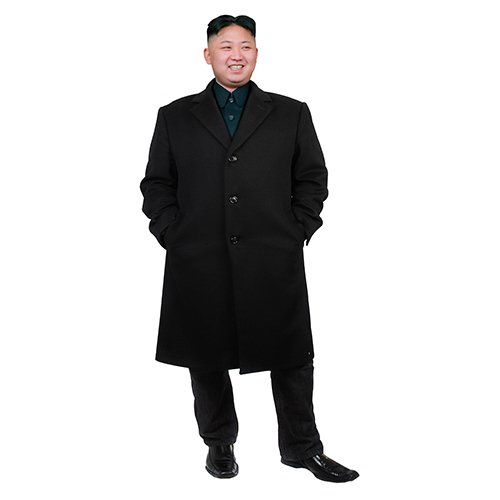 Last update on 2023-01-16 / This post may contain affiliate links which may give us a commission at no additional cost to you. As an Amazon Associate we earn from qualifying purchases.