Our Thoughts on The Pet Swing:

If there is one thing a pet loves to do, it’s swing!

Did you know swings were actually invented by a dog?

In 1867, a dog named Colonel Ruffington Barksly III from Kentucky was sitting on his wrap-around deck overlooking his land.

“I’ve got quite a bit of acreage here” he mused to himself, “I bet I’ve peed on almost all of it” he said smugly.

But then his self-satisfaction quickly turned to sadness. The type of sadness he hadn’t felt since he accidentally mistook and old leather boot for a sirloin steak.

“I’ve never made anything of this land other than a public restroom. What kind of pup am I to not take advantage of this gorgeous land?”

Colonel Ruffington Barksly III knew then and there he needed to get to work, and not the kind of work that resulted in a yard full of poop. Real work. Dog work.

The mighty dog was filled with a fire in his belly. Maybe it was that boot he ate, or maybe it was a passion burning deep inside him for more.

He began sketching out a design that would forever change both the landscape of his yard – and playtime for millions of animals around the planet for centuries to come.

What was a simple bolt of imagination quickly took shape as a rough drawing on an old cedar shingle.

He was so excited he even peed a little – but not in his yard. In his work trousers.

Weird that he had trousers, right? But he did.

Finally, after several weeks – it was finished. There on his sprawling estate stood the world’s first dog swing.

A swing that would allow Barksly to indeed soar like an eagle.

His dreams were achieved.

He took photos of the swing and quickly began manufacturing prank gift boxes with photos of himself on them.

No mere mortal could ever afford this incredibly engineered swing – but they could gain enjoyment from the photos.

And such is the legacy of Colonel Ruffington Barksly III – the only dog in history to design a real, working pet swing.

Ok, ok, so, here’s the real deal: you can’t actually own the pet swing. But…

You can own a box with a picture of the pet swing!

You may be wondering – “Yeah, I like the prank gift box…but whatever became of that old mutt?”

Believe it or not, Barksly became a bit of a local legend.

He swung on his swing for hours at a time, with all the townsfolk gathered around to watch.

One day, it happened.

Barksly had built up strong momentum on the swing.

The harness broke after so much friction and usage – and Barksly went soaring into the sky.

Then he grew wings and flew away.

Barksly did become that eagle he always wanted to be!

Legend has it that every once in a while, you see a dog with wings fly over that same estate – peeing from the sky.

Click Here to Buy the Pet Swing on Amazon 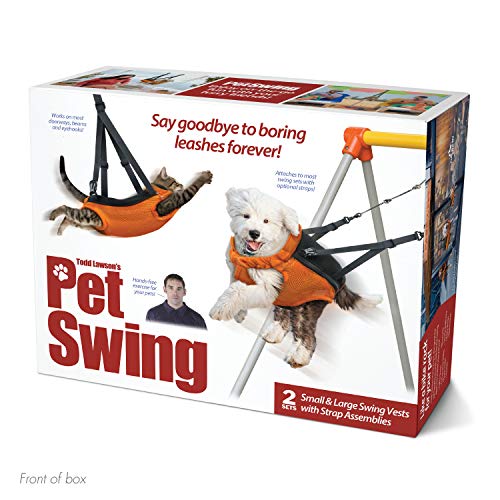 Last update on 2020-04-10 / This post may contain affiliate links which may give us a commission at no additional cost to you. As an Amazon Associate we earn from qualifying purchases.