$9.98
Buy on Amazon
Define Awesome is a participant in the Amazon Services LLC Associates Program, an affiliate advertising program designed to provide a means for sites to earn advertising fees by advertising and linking to amazon.com.
Share the Surprise Snake Potato Chips with your friends:

What You Need To Know About Surprise Snake Potato Chips:

“Show me a person who does not like potato chips, and I will show you a loser.” – Former President Grover Cleveland

OK – so there’s no actual, physical or verbal proof that the former President of the United States actually uttered those words. But can you imagine if he did? That would totally be awesome.

It’s just a fact. A fact that has existed since the world was created in 1887. Also a fact.

The seemingly impossible question that has plagued potato chip lovers for decades is this: how can you take something so perfect as the potato chip…and improve upon it?

Well, pal, you’re ’bout to french your fries when you read this next sentence here:

We’ve figured it out. We know how to make the potato chip better. It comes with a twist. Are you ready?

We proudly introduce to you:

A fake can of potato chips with a fraudulent snake inside:

You see what has happened here?

Your life has just changed.

But here we are.

Now that you’re an insider of the fake potato chip can industry, let’s explain 3 whole little-known reasons as to why this product even exists:

2. Because you can use it to scare your friends.

Showing up anywhere with a can of potato chips is awesome. Everyone is going to want a chip. It’s just what happens. But then. BUT THEN…

The person goes to open it.

A snake (not real?) comes tearing tail out of that can and scares the living dead out of the person (definitely real).

So why should you consider buying at least one, if not several of these hilarious potato chip prank cans?

Because duh. Plus, here are at least 5 places you could totally bring this prank to and will definitely be considered a hero:

Snake as a gift.

2. Leave it in the airplane bathroom. Next person won’t be able to help themselves. BOOM.

Snakes On a Toilet.

3. Under the sheets. “Whoa! Someone left some chips in…” BOOM.

5. Car. “Hey man, I didn’t know you we’re going to have potato chips waiting for me on the seat.” BOOM.

There are literally limitless ways to use this prank snake in a can:

A Doctor’s Office. Any Really.

The person who opens the potato chip can realize they’ve been taken on a prank adventure!

They scream at the snake,

Then they hugged you.

The prank snake in a potato chip can.

Making friends, family and coworkers love you even more.

Disclaimer: There is no disclaimer to this product. It’s awesome. It’s a fake snake in a can. Come on, what’s better than that? Nothing. 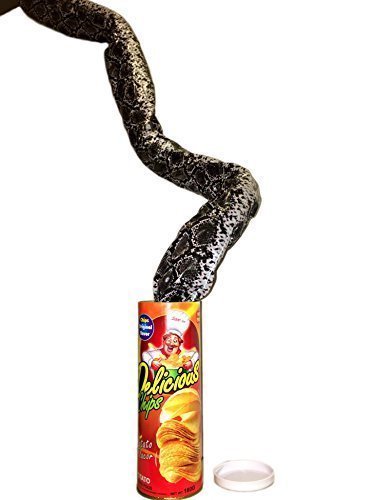 The Book of Cat Poetry