$9.99
Buy on Amazon
Define Awesome is a participant in the Amazon Services LLC Associates Program, an affiliate advertising program designed to provide a means for sites to earn advertising fees by advertising and linking to amazon.com.
Share the Toilet Squirt Gun with your friends:

What You Need To Know About Toilet Squirt Gun:

Ladies and gentlemen, allow us to introduce the prank master general, Sir Edgar Toots and the story of his claim-to-fame with the toilet squirt gun prank.

The legend of Edgar Toots is far and wide in this fair (and sometimes unfair) land.

If you aren’t familiar with the lore and legacy of the man once described by GAG™ MAGAZINE as “the frontrunner for the most important human being in the history of mankind,” let us give you just a teaser of why he is so deserving of such incredible fanfare.

Sir Edgar Toots (or “Toots McGroots” as his close friends and family referred to him) was born to immigrant parents in Bolivia in the late 1890s.

McGroots decided that while Bolivia was righteous, it just wasn’t righteous enough for his personality type.

So he packed his things and moved to Brooklyn in 1912.

It was in Brooklyn that McGroots opened the “PRANK APOTHECARY AND SLEIGHT OF HAND CORNER EMPORIUM” during the rainy Autumn of 1919.

The shop gained him immediate fame and fortune, as Americans – especially New Yorkers and Brooklynites that had a seemingly insatiable appetite for gag gifts

McGroots went on to host weekly public expositions featuring toilet pranks and gags such the world had never seen, such as:

Draped in expensive furs, pretend missing teeth and pants that were always slightly too small for him, the top hat-wearing weirdo was a beloved figure in the eyes of anyone who even remotely knew of his lavish and prank filled lifestyle.

Then one day it happened.

When it seemed as though Sir Edgar Toots a/k/a Toots McGroots could not top himself, he did.

A crowd of over seventeen people gathered for his weekly show outside the corner emporium.

The typically boisterous Toots said nary a word.

He simply placed a familiar-looking object on a stool, located center stage for all to see.

He silently pointed to an onlooker.

The onlooker, a 39-year-old male from Hoboken sheepishly walked onto the stage.

Before him, on that very stool was a miniature, plastic toilet.

Toots simply backed up and let the man inspect the item.

The man slowly reached down and lifted the lid on the replica toilet.

Inside, as it opened, he could see a plastic representation of poop.

The man began to smile, until –

BAHAHAHAHAHAAH! The man, the crowd and Toots McGroots himself let out the largest belly laugh in world history.

This tiny toilet item, which just so happens to also be a toilet squirt gun, so seemingly insignificant, had captured the imagination of quite literally everyone.

A four-inch, plastic toilet prank. That looks like it’s filled with poop. That sprays water when the lid is lifted.

Also known as a toilet squirt gun by many.

And now…it could be yours.

Perfect for men, women, children and anyone who respects the life, legacy, and brilliance of Sir Edgar Toots. The man with the toilet prank of all toilet pranks. 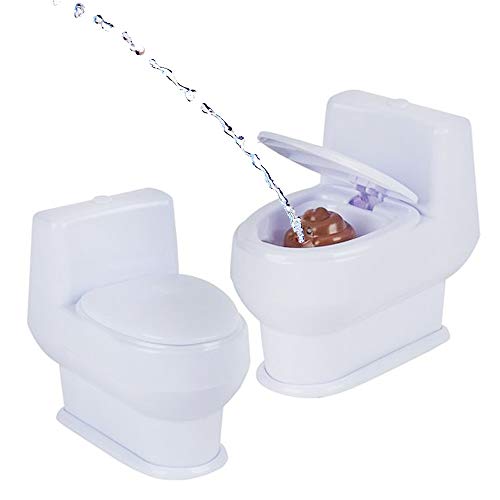 Last update on 2023-01-23 / This post may contain affiliate links which may give us a commission at no additional cost to you. As an Amazon Associate we earn from qualifying purchases.

The Magic Crystal Ball for Pets